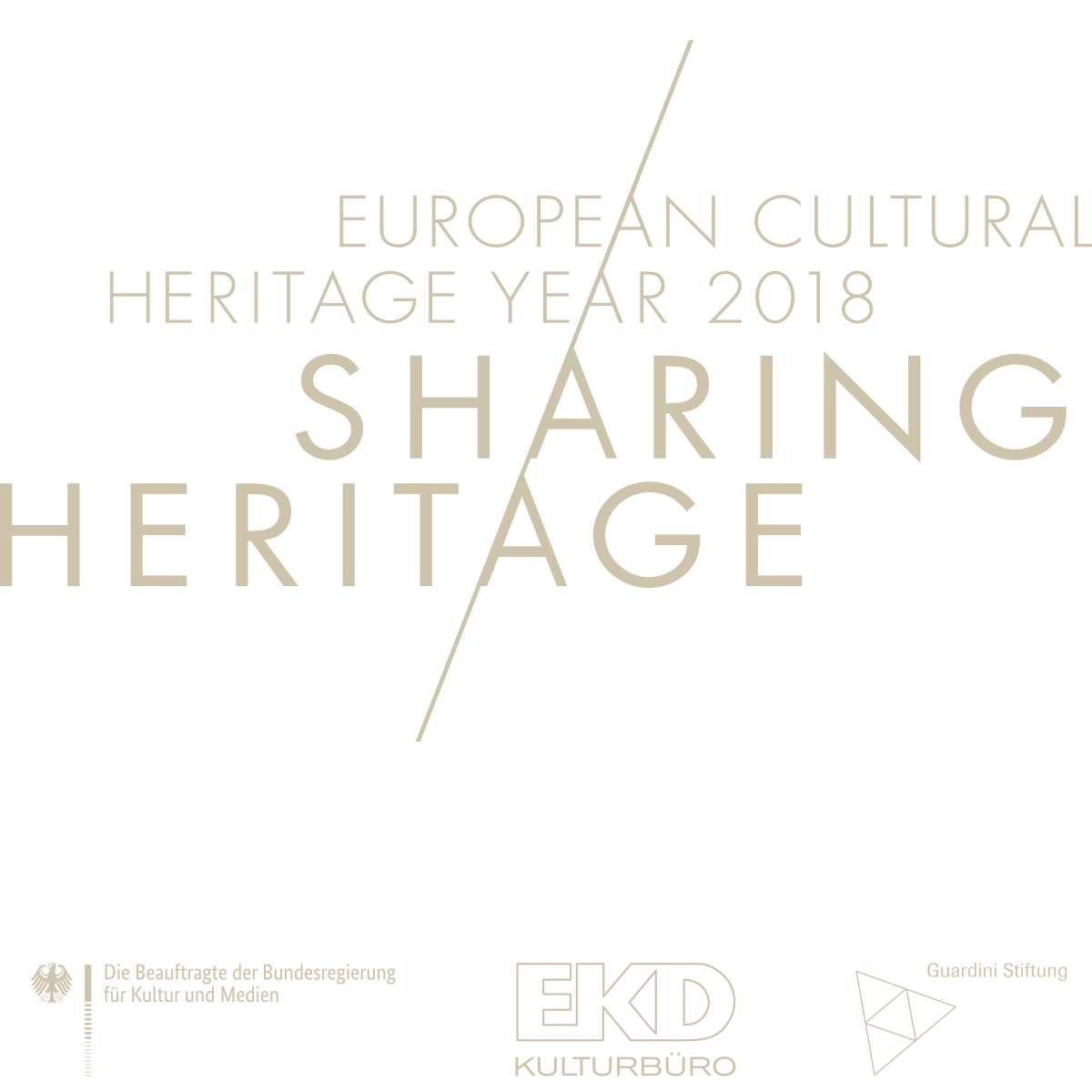 “Sharing Heritage” is the title of the first European Year of Cultural Heritage 2018. It focuses on the treasures and the beauty of Europe’s cultural diversity. With numerous European partners, the idea was developed by the German National Committee on the Protection of Monuments (DNK) under the responsibility of the Federal Government’s Commissioner of Culture and Media (BKM). The European Parliament and the European Commission have supported the initiative. – “Sharing Heritage” does not merely show buildings as stone witness of history, it also depicts century-old cultural landscapes and European heritage in music, literature, traditions and crafts. All this shapes us. We share it with one another. We pass it on. Through interacting generations, “Sharing Heritage” links our present and our past – locally and Europe-wide. The German contribution enjoys the patronage of Federal President Dr Frank-Walter Steinmeier.

Idea and Impulse: This exhibition does not present an overload of information. It wants to invite visitors to dive deeper into the subject on their own. The topic is simple and easy to grasp. It focuses on the perception of name, place and history as part of one’s own reality and identity here and now. Reusable cardboard boxes stand for ecological sustainability. Ordinary packaging material becomes an unusual means of presenting information. Its practical, cubic form borrows from the aesthetics of clear architecture. This allows for a flexible design of the exhibition, which may freely be changed and adapted to its location. Blank boxes serve as an impulse to reflect and as an invitation to continue writing.

A name serves to describe a person, a thing or an activity. Everything that surrounds us has a name. A name clarifies, defines and identifies something. It distinguishes one thing from another. In the perception of our counterparts we connect someone’s name with the individual, with their idiosyncrasies, their charisma and their role. Likewise, names explain our origin from a family and often from a place or region. Names such as Miller, Major, Shoemaker or Bailiff keep alive the memory of regional traditions and professions. The same can be said for biblical and other religious figures or famous people. Hearing their names evokes a certain meaning derived from their history and our assessment of it – miller, shoemaker, bailiff and major (a medieval administrator) were important professions. Names are also made up by using imagery for certain attributions, as Tashunke Witko (Crazy Horse) or Tatanka Iyotake (Sitting Bull) in the Native American tradition. Further examples are the early German names Adalbert (the precious one) and Uta (the rich one) or the English Blanchard (the white, shining one), the Italian Franca (the free one), the French Ivonne (the female archer) or the Turkish Alev (the flame).Thus, names are associated with special character traits, virtues or values. We inherit them from the past, bear them in our times and carry them on into the future. With names we connect home and foreign lands, tradition and self-assurance. Names are real and emotional reference points for both the individual and the region.

MARY
In the Languages of Europe

Nicholas
In the Languages of Europe

Churches and their names convey various traditions. The building represents itself as a century-old stone witness of the faith of earlier generations. Its art shows the power of expression and the imagination of our ancestors. It tells us about their world of thoughts. A church is the center and visible landmark of a place and it stands for a certain time, e. g. with its heavy walls and arched windows of the Romanesque period or the large tall windows and lancet arches of the Gothic era. For emigrants the local church symbolised their home. Travellers oriented themselves towards its steeple. Towns and villages offer postcards depicting their churches. Elisabeth, ­Magdalene, Thomas or Andrew – all these and other biblical names after which churches are named create an identity which connects people to the ­image of this specific person’s life and character traits. From this, standards can be derived which offer moral orientation. Not only do they determine faith, but culture and life generally. In addition to faith, also love and hope belong to those guiding principles. Faith, love and hope are the fundamental values of Christian culture. They are symbolised by cross, heart and anchor. They can be found – each on its own or all combined – at churches or on tombstones. Sailors have cross, heart and anchor tattooed on their forearms, many others wear them as necklaces. Through those values and their respective symbols we form – often subconsciously – a close relationship to these particular places and churches. Here we find security and also comfort – physically, emotionally and spiritually. Thus, culture creates identity.

Many people claim, in agreement with Johann Wolfgang von Goethe’s Faust, “Call it what you will … feeling is all; the name is sound and smoke.” Others think the opposite to be true: “Nomen est omen” – the name is a sign. They are sure: “Tell me your name and I will tell you who you are.” In the letters and syllables of a name they see a hidden message or certain qualities and traits. With names we often associate specific individuals, pictures and objects. Our memory stores them under their names. Also companies such as the car manufacturer VW pay attention to names. In the past, they named cars after their drivers – Käfer (Beetle) or Bulli (the VW minibus). Today names are derived from sports (Golf), winds (Passat, German for trade winds) or by using acronyms (T-Roc). The name is meant to evoke pictures. It creates a relationship and contact. However, we cannot define names as we can define objects like house or table. We perceive that names carry meaning, sometimes even more than one – and every human being gives a face to a name. Many people bear an extravagant name of a celebrity or from TV series such as Coco, Wolke (Cloud) or Emmylou Ocean. Others prefer traditional names such as Charles, Richard or Henry. In any case, this means something to everyone – a life here and now for some and a link to tradition and ancestry for others. The same can be said about long and short names. Some like Tess or Tom because they are short and dynamic names. Others find Amelia or Dominic attractive because they are elegant and sonorous. Where do names lead us? What lies behind our ties to them? Do they bind or burden us? Are they challenge or gift? What does our name say about ourselves? Which signals are sent out by your name?

proverbs about/ with names

Our feeling and understanding of home stem from our own history and the history of our family and social setting. This is shaped by parental home, school, friends and the region and faith in which we grow up. Home is a place of comfort and longing. It is also a place of conflict and ordeal. In all this, names serve as an important link. Signifying objects and places, they keep the past alive in present times. Place names ending in -burg (-castle) or -furt (-ford) remind us of these places’ function as castles or river crossings. People’s given names represent both history and today’s reality – as in the female names Maria or Miriam, Mary or Maryam and in the male names Nicholas or Nico, Klaus or Niklas. A lot of names have been
in use for centuries. Biblical names such as Hannah, Elisabeth, Michael or Thomas are even older. The Irish Kevin is no less than 1.300 years old. The Cornish name Jennifer was already known in medieval legends as Genevieve. Names are related to particular human beings and connected with certain qualities and values. They recur again and again because from those values the names gain power and sound and beauty and a home. Churches, too, bear names – names of extraordinary human beings who became role models by living according to Christian standards. Churches spread those names into the region and into our lives. Human beings bear them, too, creating here and now a direct emotional relation to these names. Human beings constitute home. Names constitute home. They form a bridge to other human beings and bind us to family and friends.

The Latin “Patronus” signifies a protector or advocate to whom an institution (church, hospital or school) is assigned. Usually, the patron was a person who had been canonized such as St Mary or St Nicholas. Churches were built for and dedicated to these saints. Originally, this was done at their tombs. With the spread of holy relics like bone splinters it became possible to erect churches and altars at any desired location. Today we can easily discern who financed them. Churches of St Nicholas were often paid for by merchants and seafarers as he is their patron. He is also the patron of Greece, Croatia, Russia, Lorraine, Sicily, Aberdeen, Alicante, Amsterdam, Bari, Freiburg (Switzerland), New York, Siegen as well as of children, students, girls, bankers, prisoners, pilgrims and travelers. St Mary is – to name just a few – patron of the Cistercian monastic order, the Catholic Church and all (Catholic) Christianity, also of Croatia, Poland, Hungary, the USA, Bavaria, Catalonia, Aachen, Breda as well as of virgins, priests, midwives, landlords/landladies, cooks, potters, shipmen and the lost.

The exhibition “Called by your name” is shown in one St Mary’s church and one St Nicholas’ Church of each of the German federal states in 2017. The chosen churches represent a large network of churches bound together by their names and their appeal throughout Germany and Europe. The history behind names and churches is the history of places and people. They exemplify starting points in the exploration of our own name and our deep-rootedness in history.